Spring 2017 was dedicated to finishing the geospatial layers, coding the mortality dataset, filling in gaps in the property value dataset, building the population datasets, and the first stages of analysis. We finished the historical address locators for the city. The first locator is a reconstruction of the pre-1894 address numbering system (dual range consecutive) and street names. We encountered issues with duplicate street names in the pre-1894 system (e.g., seven different streets named Washington), but we mitigated these issues by using a zonal field with ward numbers (similar to zip codes). The 1894 changes switched the city to the modern system of 100 addresses per block and removed all duplicate street names through a mass renaming.

We began standardizing the causes of death in the mortality database with the International Classification of Diseases (ICD-10) codes. Retrospective diagnosis can present issues, especially with the rapidly changing definitions and understanding of diseases and illness at this time, but we are working to minimize these issues through the development of a confidence index for common diagnoses. This index is based on the accuracy of diagnostic and symptomatic information found in time-sensitive historical medical textbooks (e.g., Essentials of the Principles and Practice of Medicine, Hartshorne 1881; The Principles and Practice of Medicine, Osler 1893, 1902, 1912).

The New Orleans Public Library had the property tax records that were missing from the state collection. We scanned these and incorporated them into the dataset.

We mapped the 1890 city directory, which is the first base-level population dataset. The population proxy dataset is important since the 1890 manuscript census for New Orleans (and most of the country) was destroyed in a fire. In conjunction with the Kent State GIS Health and Hazards Lab (Andrew Curtis, Jacqueline Mills Curtis, Jay Ajayakumar), we developed scripts to batch clean the OCR’d text. We structured the text using Open Refine. At Kent State, we also began analyzing the mortality dataset with a spatial filter tool they recently built. It uses a Monte Carlo method to identify statistically significant distributions of a specific disease.

The project team georeferenced Sanborn maps and digitized building footprints from 1908 this semester. The team finished digitizing building footprints in the French Quarter. The building footprints allow for future analysis of same-household mortality, more accurate address locators (point based), land/building use studies, and for the reconstruction of 3D environments.

We cleaned the mortality database. We digitized the microfilm reels of property tax ledgers for the sample years (1880-1915, every 5th year). Additionally, we created a 40,000-record property value dataset from these tax ledgers (~5,000 blocks per year) and geocoded the records by city block. We acquired city directories and preprocessed 7100 pages (1880-1915, every 5th year). We began constructing base-level population datasets from these city directory pages. We started geocoding the mortality records and ran some preliminary spatial analyses.

We built the 50,000-record mortality dataset from death certificates. The dataset includes records for every fifth year from 1880 to 1915. Variables include Name, Sex, Race, Nativity, Age, Marital Status, Residential Address, Cause of Death, Years in City (limited), Occupation (limited), and Mother/Father Birthplace (limited until later records). We began constructing the historical address locators from city directories, Sanborn and Robinson maps, and street guides. We digitized the New Orleans block footprints from the 1883 Robinson Fire Insurance maps and modern aerial imagery.

We applied for grants, planned the structural organization for the mortality database, and georeferenced the Robinson Fire Insurance maps (1883) and the Sanborn Fire Insurance maps (1885) for New Orleans. We created controlled vocabulary lists for data validation. These included causes of death from Charity Hospital annual reports and modern/historic street names. We began setting up the project documents on Google Drive.

We organized and processed the death certificate images. We identified sources of funding and began preparing grant applications.

We worked with the Louisiana State Archives to acquire the 230,000 death certificates for New Orleans, 1877-1915. At our request, and with the endorsement of the Louisiana State Archives, Family Search digitized the microfilm reels and provided digital copies to us and the archives. Furthermore, we obtained the death certificate index (volume, page number, name, date of death, and age) and the Orleans Parish disposition of orphans records as structured data. 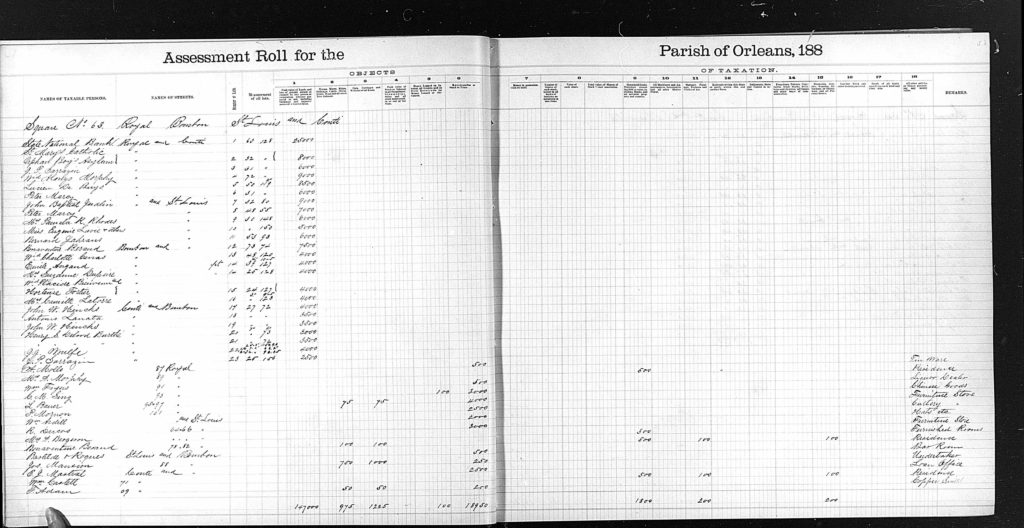 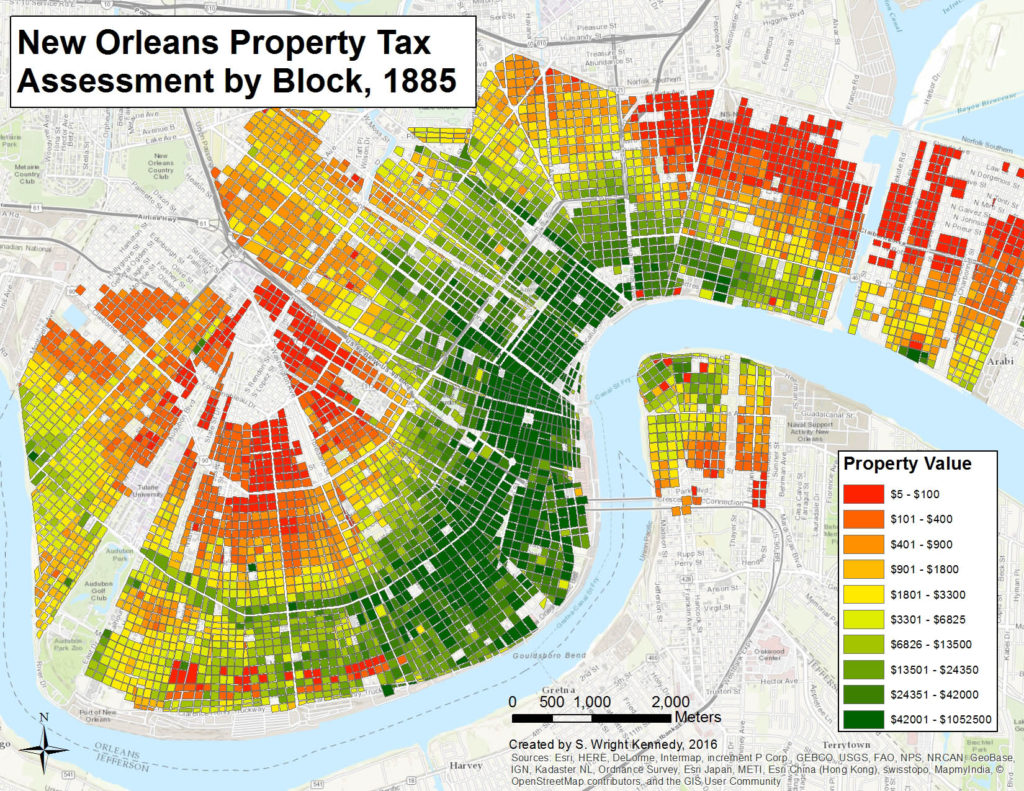 Property values by block from city and state tax ledgers in 1885. All Preliminary Maps 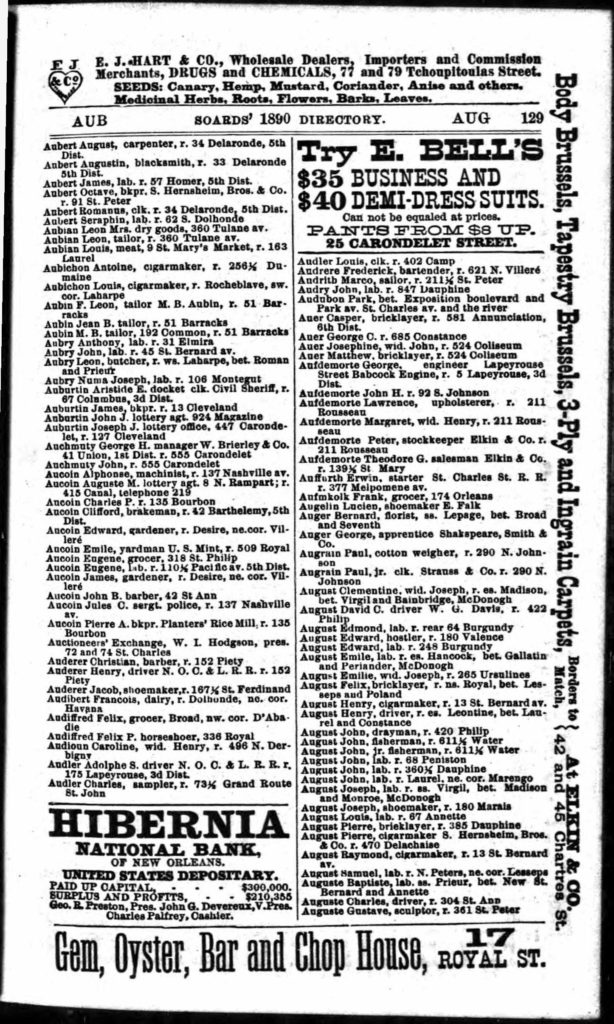 Page from the 1890 City Directory 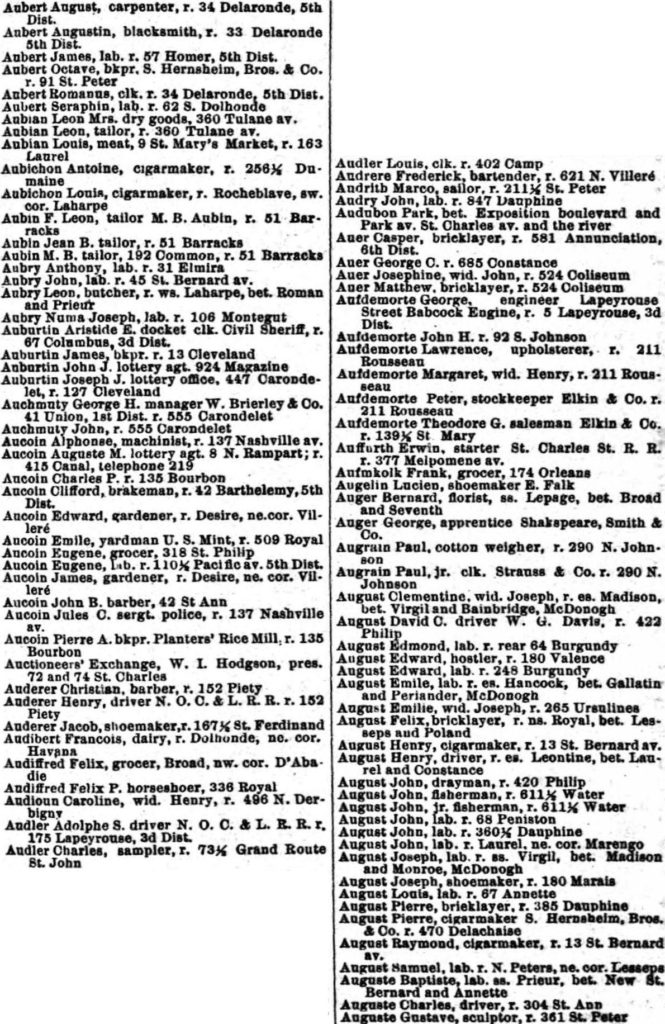 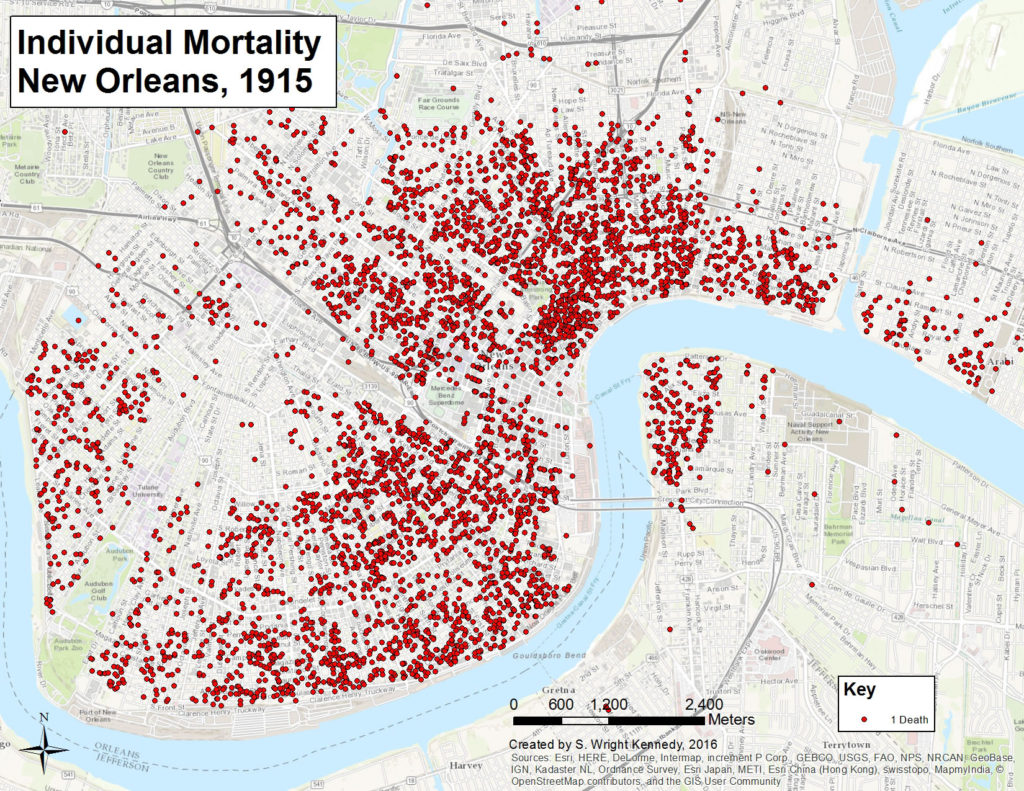 Individual mortality in 1915. All Preliminary Maps 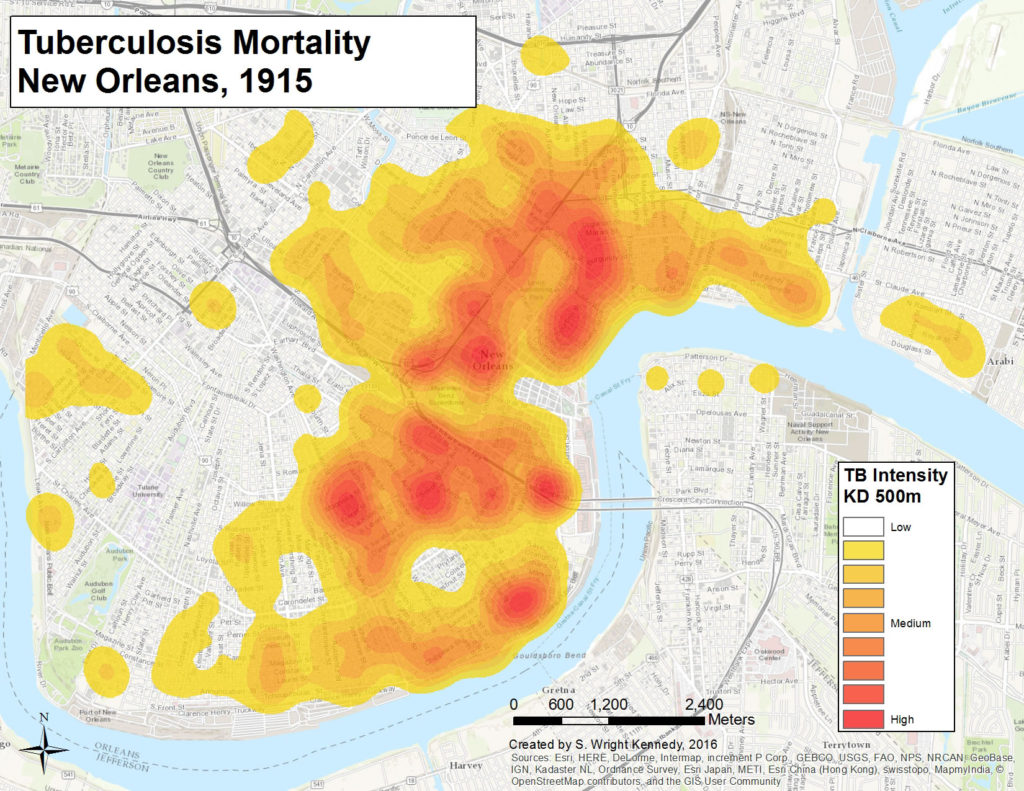 Intensity of tuberculosis mortality in 1915. All Preliminary Maps 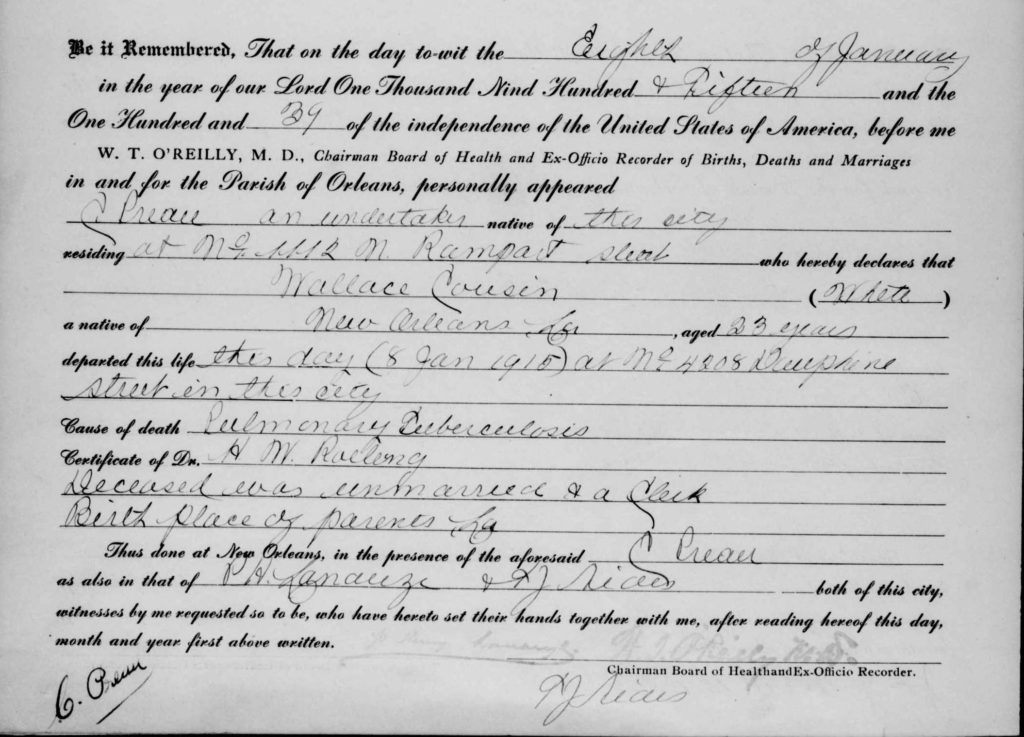 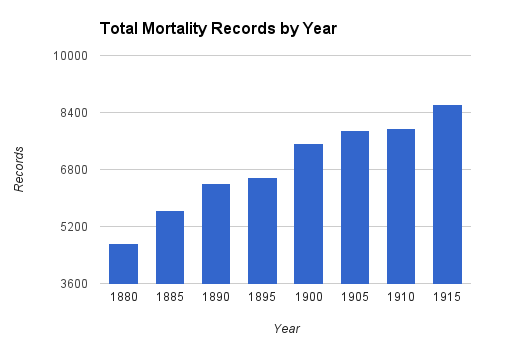 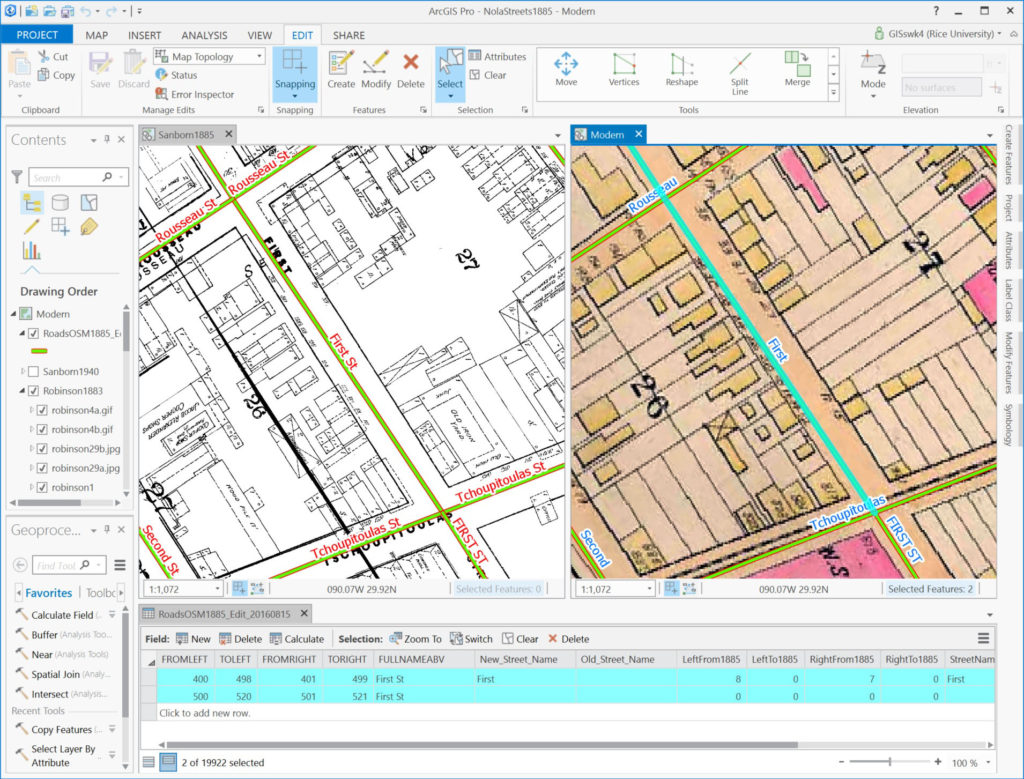 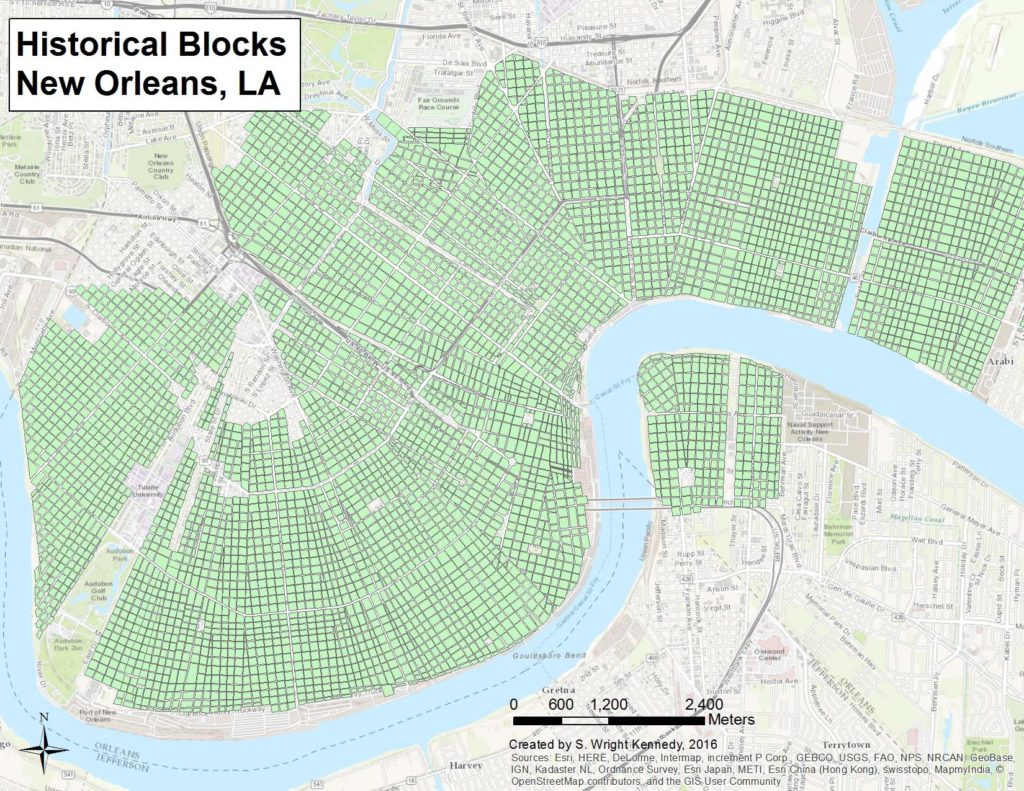 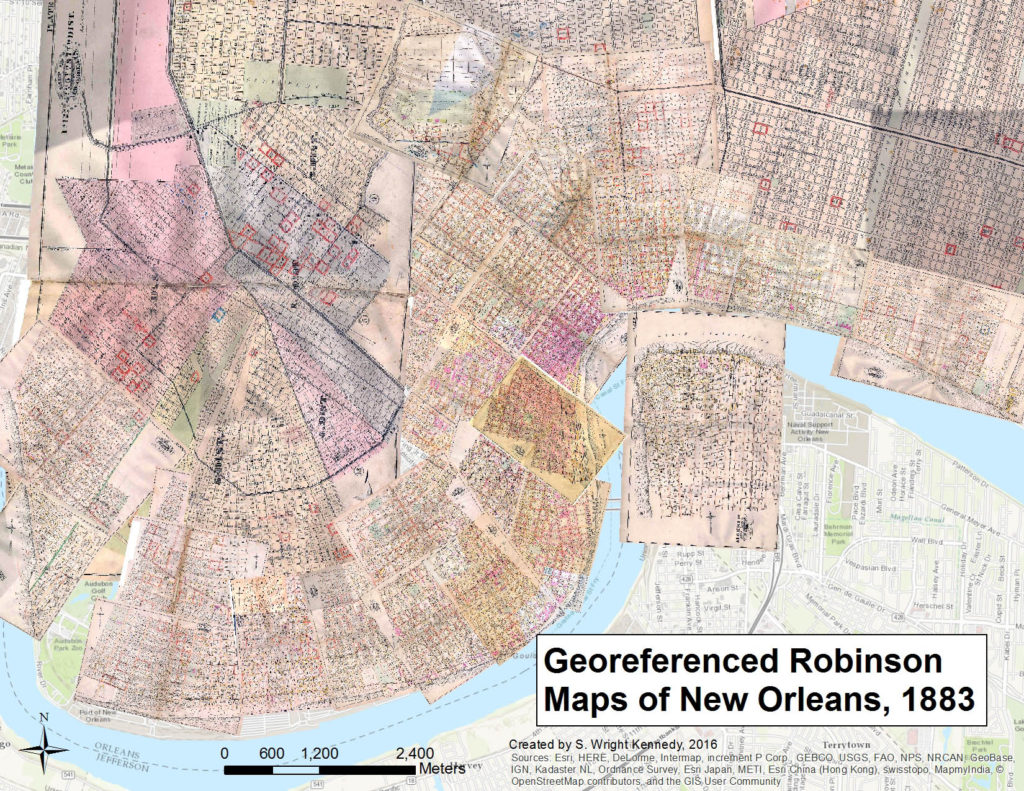